OK, part of my goal for the holiday weekend was to start digging a little deeper into Windows Phone development (amongst other things). Right off the bat, I sidetracked myself and decided to play around with deploying WordPress in Windows Azure/SQL Azure. Both of you who read this blog know that I have been involved in the Orchard Project and that I am really excited about the progress there. However, I have been saying for a long time that it is all about interoperability – so for Azure – I needed to see what it was like deploying WordPress, using the Windows Azure Companion and this great writeup from Jim O’Neil. After a little head scratching – mostly about the where you find the WindowsAzureStorageAccountName – it is not the friendly name that shows up in the account  – see screen grab – it is the name in the URI. Anyhow, that all went amazingly well. At this point I could provision a WordPress site in about 15 minutes. There is one caveat, for the time being, as the Windows Azure Drives are read/write for one web instance and read only for any others – you can only scale up (go to a bigger instance), but not not scale out to multiple instances. This is not a major concern for the types of deployments I am looking at and I am certain that folks are working on the requisite enhancements to remove this constraint. 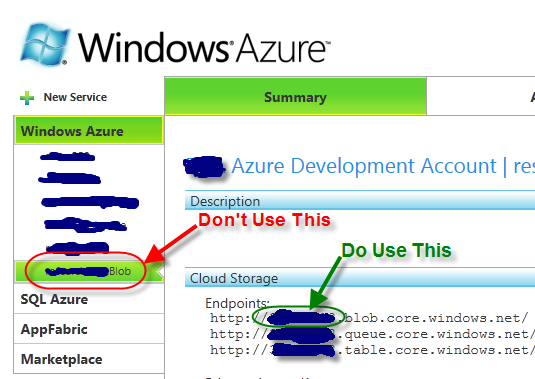 But, I digress. This post is about progress on the Windows Phone App I am working on. One of the key components is being able to have the phone “Speak” to the user. Bing Translator has that capability – exposed with a number of web services APIs. As this is Silverlight, you need to use the Async Methods – for simplicity – and to rail against the prevailing wisdom I am using the SOAP service (when the tooling is there it is so drop dead simple). But frankly, I was a little rusty on the async syntax and the hoops you have to go through for playing back the audio file that the service returns was a little arcane for a newbie. So, I set off to find a good example. There were a few blog posts with code snippets that were of no use to someone not already really proficient. What I needed was a sample project to “study”. After a total of two hours of searching – sadly even fellow New Yorker Charles Petzold’s 1,000 page free opus on Windows Phone Development was no help – I stumbled onto this post with a great reply from babaandthepigman his avatar may be a can of spam, but the sample code posted here was as fine as jamón ibérico de bellota. So thanks to Baba,  I have cleared the major technical hurdle. More to come!

#1 WordPress – Azure – Remote Desktop, almost. on 12.14.2010 at 5:02 PM
As I mentioned in my last post, I got WordPress up and running in Azure using the Windows Azure Companion . I used one of the prebuilt packages, it was drop dead simple. I then proceeded to play around with Azure Remote Desktop access following Maarten